HVS Image have announced a new tracking and analysis module for Radial Arm as part of the HVS Image 2013. Like the previous HVS Image 2020,2100 and 2012 systems, the 2013 has full backwards compatibility so you will be able to capture and analyze more spatial learning data yet retain your experiments and user training, but now it's a software package that you can use a generic web cam with  on a standard off the shelf laptop. 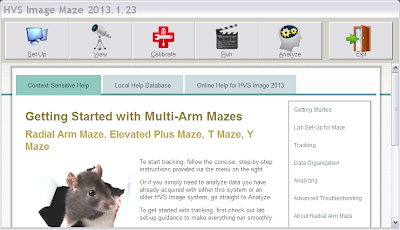 The HVS Image Maze Module has powerful context sensitive help that allows inexperienced users to be up and running in minutes rather than days. It shares a simplified UI (user interface) with the other new HVS Image 2013 software which also supports Morris Water Maze, T-Maze, Y-Maze, Barnes Maze and Open Field.
Posted by neuroscientist at 6:45 AM